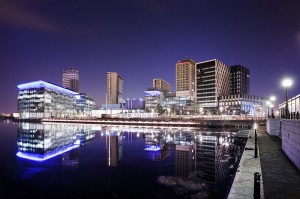 The BBC announced yesterday that it will move around 120 Future Media roles and 102 Technology department roles from London to its northern base in Salford in 2015.

The BBC said the relocation will enhance its “strong digital presence” at its MediaCityUK offices in North Manchester and forms part of the BBC’s ongoing strategy to “reduce the size and cost of its property estate, to invest more of the licence fee in programmes, and build its presence outside the capital.”

The news comes after the BBC said that its BBC Academy and HR units are moving to Birmingham, with around 25 BBC Workplace and Safety staff to join them next summer.

Overall, the corporation is moving a number of teams out of Media Village, London W12, to bases in Salford, Birmingham, Caversham and other buildings in London.

“We are well advanced with reducing the amount of space the BBC occupies in London W12. Spending less on these buildings will enable us to invest more of the Licence Fee in programmes, as well as continuing to build up our presence out of London, ultimately bringing us closer to audiences,” said Anne Bulford, the BBC’s managing director of finance and operations.

“BBC Worldwide is due to leave the Media Centre early in 2015, so we are developing proposals on how to accommodate the remaining occupants and free up this building to release savings.”

Peter Salmon, the BBC’s director for England, said: “The North and Midlands are right at the heart of BBC plans to spend the licence fee closer to all our audiences. These 200 plus new roles for Salford cement its position as a key digital hub for the UK.”

He added that more than 200 positions are also being created in Birmingham from next year – “another significant development that keeps the Corporation locked into England’s most creative regions.”

The BBC said that a “substantial number” of the roles moving out of London are currently vacant or filled by contractors, meaning a fewer number of permanent staff were affected by today’s announcement.