Divan.TV to be first Russian service on Chromecast 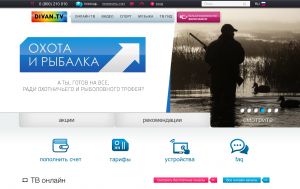 Russian and Ukrainian-language OTT platform Divan.TV, which offers a combination of live TV and subscription video-on-demand channels to Russian and Ukrainian speakers worldwide, will launch on Google’s Chromecast platform in July as the first Russian language service on the platform, according to Andrey Kolodyuk, founder of Divan.TV and managing partner, AVentures Capital, speaking at the Digital TV CEE conference in Budapest yesterday.

Kolodyuk said that the company, which launched in the Ukrainian market, now has 500,000 registered users and is available worldwide in 200 countries. As well as offering subpscription and transactional contnet the company offers a range of free content.

Kolodyuk said that Divan.TV is also looking to expand its feature set by launching sharing of recordings and enabling users to send VoD movies as gifts between friends.

The service recently launched services including a new TV guide based on a personal TV wall based on personal preferences with links to Facebook accounts and Twitter walls.

“We are allowing customers to choose content based on personal preferences and not to bother about channels,” said Kolodyuk. “If I choose sport I can get recommendations about what is playing.”

The service has been live for the last couple of weeks and people can comment on their Facebook wall about what they want to see.

Divan.TV also recently launched another value-added service in the form of a second screen service related to the World Cup and other football content. This will enable team ratings and will also enable viewers to engage in real time betting, initially to win discounts and other non-cash benefits.

“This is engagement not only for sports betters but for people who just want to predict the score and to enable real time interaction with TV shows,” said Kolodyuk.