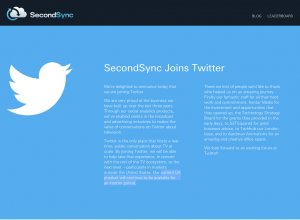 In a post on its site, SecondSync said that Twitter is the only place that hosts “a real-time, public conversation about TV at scale,” and that becoming part of the social network will allow it build on this.

“By joining Twitter, we will be able to help take that experience, in concert with the rest of the TV ecosystem, to the next level – particularly in markets outside the United States,” said SecondSync.

It added that its current UK product will continue to be available for an “interim period.”

At the same time, Mesagraph, a French Social TV firm that analyses real-time online conversations, said that it was joining Twitter, with its team due to move over to the UK.

“As part of Twitter, we will be working closely with TV networks, agencies, advertisers, producers and integrators to help those partners make the most out of Twitter,” the firm said in a statement.

Mesagraph already has experience working with TV networks such as Canal+, France Télévisions, M6 and TF1 and has developed a platform to provide analytics about “how people engage with TV shows and brands to the TV ecosystem.”

“We’re really excited about what’s ahead of us. Not only is Twitter the platform where the vast majority of public social TV comments happen, it’s also an immense source of opportunities for advertisers to reach their audience creatively and efficiently,” said Mesagraph.

SecondSync was previously minority-owned by Kantar Media, a market research firm owned by ad giant WPP, which bought into the firm last August. Since then, SecondSync and Kantar have worked on a range of TV measurement and analytical tools to the UK.

SecondSync also recently agreed a TV partnership with Facebook, producing a report in February with the Twitter rival that claimed up to 25% of TV audiences post content related to the show they are watching on Facebook, with the majority of these comments made in real-time.

Both the SecondSync- and the Mesagraph-Twitter deals were agreed for undisclosed terms.