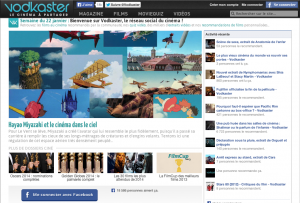 French movie-interest social network provider Vodkaster is to merge with DVD digitisation specialist Riplay with a view to launching a new Netflix-like video-on-demand service in the country.

Vodkaster and Riplay are in the process of raising €1.2 million from investors Partech Ventures, Elaia Partners and 3T.

The three funds will take a minority share in the operation, according to a report in financial daily Les Echos, with the founders of Vodkaster and Riplay holding a majority stake.

Riplay, formed in 2012 as a result of a merger of services CheeseVideo and CheeseMusic, allows users to digitise their DVDs and buy and sell digital versions of DVDs for viewing on multiple devices.

According to Les Echos, Vodkaster has acquired an UltraViolet licence that will allow it to extend Riplay’s service. Vodkaster CEO Cyril Barthet told the paper that the UltraViolet platform would enable users to access videos between the closure of the transactional VoD window, when movies are generally only available on TV, and the subscription VoD window, which in France only appears 36 months after their release.

Barthet told Les Echos his aim was to create a “French alternative to Netflix”.