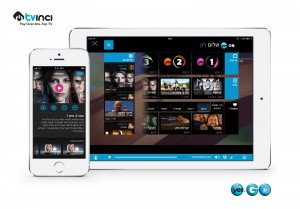 Yes GO, announced today, is due to go live in the first half of this year and will allow Yes subscribers to access the live linear channels and on-demand content included in their TV package from different devices.

At launch the service will be available on iOS and Android smartphones and tablets, as well as PCs and Macs, with further deployments planned in the future. Users will initially be able to access Yes GO on two devices per household.

Tvinci will provide both the back- and front-end support for the service, which the firms claim will be “Israel’s first personal and social multi-screen TV service.”

“This is a super-strategic project for Yes. They see themselves turning from a satellite company into an IP company, essentially,” Tvinci’s co-founder and VP of business development, Ido Wiesenberg, told DTVE.

Wiesenberg added that though Yes had previously offered a mobile app that included some free content, “the big thing here for the end user – for the subscribers – is that for the first time they have basically the same content that they have on the set-top box on any device.”

Yes GO will initially be offered free to Yes subscribers that already pay for set-top box access to VOD content, giving them access to the same content, as well as linear channels, from more devices.

“The launch of Yes GO places Yes in the global technological frontier for multi-channel television. Yes GO allows us an organisation to continue to pioneer premier viewing experiences, which are unsurpassed in Israel,” claimed Ron Eilon, CEO, Yes Satellite.

Among the services Tvinci will provide for Yes GO is multi-language support, including multi-audio and subtitles for VOD and linear in Hebrew and Russian. Its front-end applications will also optimise Yes GO for different screens.