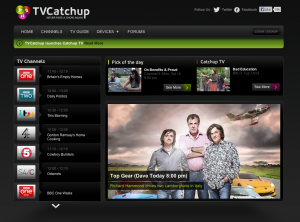 UK internet TV firm TVCatchup has been ordered to stop streaming channels from broadcasters ITV, Channel 4 and Channel 5 after being found guilty of copyright infringement.

It was also found to have infringed copyright by streaming the main ITV, Channel 4 and Channel 5 networks to mobile devices via any mobile network, and by streaming these channels to viewers outside the region the original broadcast was made.

Acknowledging the ruling, TVCatchup posted a statement on its site saying: “We enjoy excellent relationships with most of those whose content we carry, but this sadly hasn’t proved to be the case with all of the public service broadcasters.”

“We pride ourselves in always working within the law, we accordingly felt it necessary to remove a certain amount of the channels to avoid perpetuating contention.”

The service has now blocked ITV1, Channel 4 and Channel 5 from being accessed over 3G mobile networks.

It has also removed the 21 channels from its service, though 11 of these – including ITV2, ITV3, ITV4, E4, More 4, Film Four and 5* – it will still be listed, with viewers redirected from the TVCatchup web player to the broadcasters’ own channels.

“It is a significant vindication for this action that the judge has ruled 21 of our channels are to be removed from the TVC website. This result will help protect the substantial investment broadcasters make in content and is a clear message to those who seek to infringe our copyright or use our content in an illegal capacity,” ITV, Channel 4 and Channel 5 said in a statement.