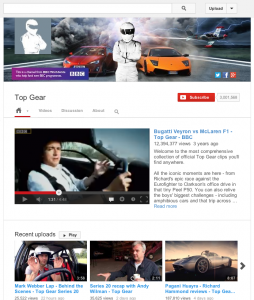 The BBC’s commercial arm launched the Top Gear channel, which hosts a selection of clips from the TV series, back in 2008 and is its most popular of its eight existing YouTube networks.

The success of the channel follows a recent push by Worldwide to up its focus on its YouTube presence. At the end of last year it launched Earth Unplugged, its first original YouTube network, made in conjunction with the BBC’s Natural History Unit, featuring content made specifically for the site, aimed at a young audience.

BBC Worldwide’s other YouTube networks include clip-based channels for two other flagship BBC programmes – Doctor Who and Eastenders, which have 165,000 and 67,000 subscribers respectively. It also runs BBC Earth, BBC America and BBC Food YouTube networks.