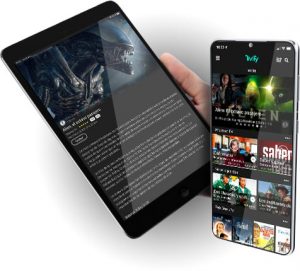 The rise of linear streaming video has been one of the major stories of the last year in the TV distribution business, with a number of players sensing an opportunity.

One company that sees great prospects in the area of linear streaming services is Spain’s Tivify, which began life as a technology solutions provider mostly for energy companies and  lower tier operators – under the TVUP brand – before going direct-to-consumer.

Tivify recently launched a ‘freemium’ offering, with viewers of the service having the option of upgrading from free-to-view advertising-supported channels to a paid for tier for €4.99 a month. The company plans to extend the scope of the service further in October with the launch of a premium offering.

According to Eudald Domènech, co-founder of Tivify, the model is France’s Molotov. The operator pays attention to aggregating local and regional channels across Spain to give the service differentiation from other streaming options, but Domènech believes that free advertising supported streaming television services (FAST channels) also present “a big opportunity”. He cites the example of Ingles Total, a free English language-learning offering comprising three channels supported by programmatic advertising.

In addition to linear streaming, Tivify also offers advanced features of the type generally associated with pay TV in Spain, such as seven-day catch-up.

The service provides content curation, with content surfaced to enable users to go direct to the correct pay application if they have a subscription. Services such as Netflix, HBO España, Disney+ and local move streaming offering Filmin can all be accessed via Tivify.

“We believe we are in the business of super-aggregation,” says Domènech. “It doesn’t matter who your broadband provider is or what platform you subscribe to, or if you are paying. We are neutral and provide programme information and recommendations and facilitate getting access to all of this content.”

He says the target market is the 50% of Spaniards who are unwilling to pay for a premium pay TV offering. Tivify does work with some small operators, including energy companies –a legacy of its original business model – but Domènech says it became clear that the bigger opportunity was direct-to-consumer.

The company launched its free basic offering late last year before debuting its freemium offering this month. In addition to planning the launch of a premium tier it is also eyeing international expansion opportunities in Latin America, with Mexico likely to be the first market for a launch, followed by Brazil. Other markets targeted for likely future launched are the region’s larger ones: Peru, Colombia, Argentina and Chile.

Domènech says that Tivify can work with content owners to develop channels for the service, including VOD-to-live offerings, enabling them to launch something for as little as €500 a month.

To make its proposition complete, Domènech says that Tivify benefits from Spain’s favourable regulatory regime, which forces public and regional broadcasters to make their content available, while services are also permitted to provide network DVR services.

Addressable advertising is largely unregulated and Domènech says that Tivify offers an attractive proposition to broadcasters willing to test it out. Partner broadcasters can decide when to include a pre-roll advert and whether it is delivered via their own ad server.

Domènech says that Tivify is able for the most part to strike mutually acceptable deals with broadcasters. Those unable to sell their full inventory can pass the opportunity to Tivify which can sometimes tap the power of its own first-party user data to sell the slot and share the revenue with the broadcaster.

On the technology front, Domènech says that Tivify is device-agnostic and is developing “apps for all ecosystems”, although he says that Android TV gives the best user experience. Tivify is in the process of trying to negotiate deals with the major smart TV manufacturers as well as Chinese manufacturers of Android TVs. The company has developed its own Bluetooth-enabled remote which can be paired with multiple devices in the home.

Domènech believes there is scope in the market to survive and thrive.

“If we can get past 200,000 registered users by the end of this year that will be great,” he says. “We can imagine a world with two or three competitors and two or three million registered users after four years. We need to convince content owners that what we have is better than their own apps.”

Prime targets are an estimated 700,000 potential cord-cutters identified by Tivify’s founders that Domènech says could be tempted by this kind of offering. He points to the Spanish market becoming more rather than less price-sensitive, with the likes of Romania’s Digi now present and eating away at the bases of higher priced mobile and broadband offerings.

The company is now in the process of seeking additional funding, having closed a pre-series round that netted €1.5 million. Domènech says the company hopes to close a Series A round by the end of the fourth quarter with a target of €2 million that could be used to kick off its Latin American ambitions.