Sky Glass is impressive, but ultimately a trade-off for consumers 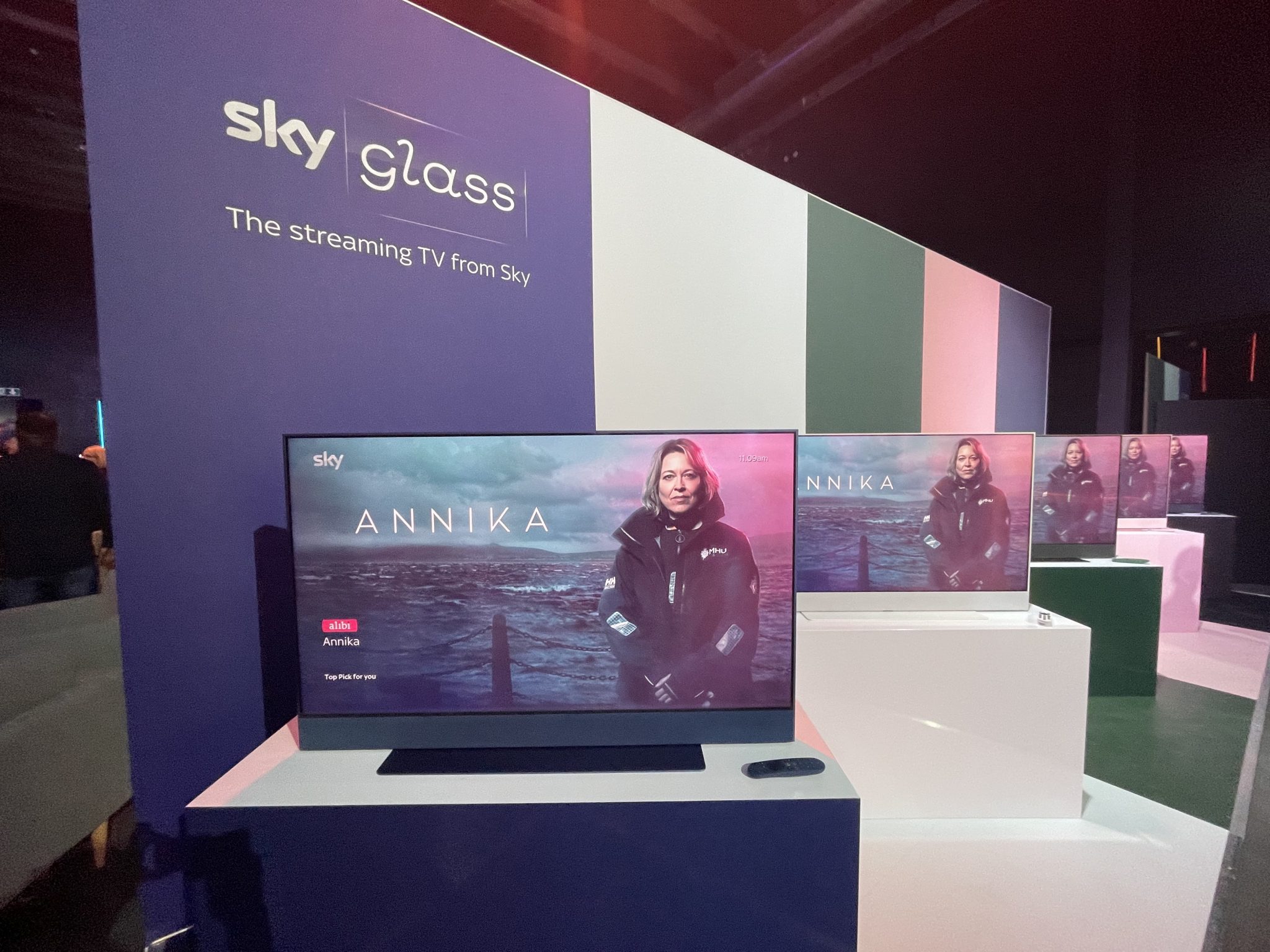 Digital TV Europe was in attendance as Sky unveiled its Sky Glass product range of smart TVs, and the company is branding it as a huge leap forward for how it presents its service.

Understandably so – this is the first time that Sky has offered its own-brand of TVs and it does away with the set-top box.

Sky Glass comes in three sizes – the 43-inch Small, which is available for £649, the £849 55-inch Medium, and the 65-inch Large available for £1049. All three models come equipped with a 4K UHD Quantum Dot display that’s capable of HDR 10 and Dolby Vision, along with an array of six speakers that present Dolby Atmos sound – a move with Sky said will remove the need for TV buyers to invest in an additional expensive soundbar.

The TVs are also available for a monthly cost spread across 24 or 48 months, starting from £13.

While these features make for good selling points to more technically minded consumers, the core focus here is the integration of the full Sky experience into the TV. As the company repeatedly stressed during its reveal event, all that’s required is a WiFi connection, a single power cable and 10 minutes of installation time.

The core challenge for end-users in the modern day of streaming is parsing through the mountains of content available. As Dana Strong, group CEO, outlined during her keynote speech: “People spend more time looking for content than watching it.”

For the operator, Sky Glass effectively circumvents the challenge of ensuring that the set-top box is on HDMI 1 and brings the premium TV offering to users the moment they turn on their device. Unless you’re a gamer using a console, the company is promising a TV where users never have to leave the confines of the Sky experience.

And this presents both positives and negatives for users and the industry at large.

Since its launch in 2016, Sky Q has significantly evolved its service offering.

The product was initially pitched as an easier way of getting Sky in multiple rooms, with one core Sky Q box and then a handful of Mini boxes connected to screens around the house.

In the years since, Sky Q has integrated an increasing number of apps such as Netflix, Disney+, Amazon Prime Video, BBC iPlayer, ITV Hub, All 4 and others. And in the coming months, the likes of NBCU’s Peacock and ViacomCBS’s Paramount+ are launching on the platform as a springboard into the wider European market.

I have previously written positively about Sky acting as a gateway into the market, and how the pay TV operator’s captive audience can significantly contribute to the success of a streamer (take for example the positive performance of discovery+, which is offered to Sky customers at no extra cost for their first year of access). 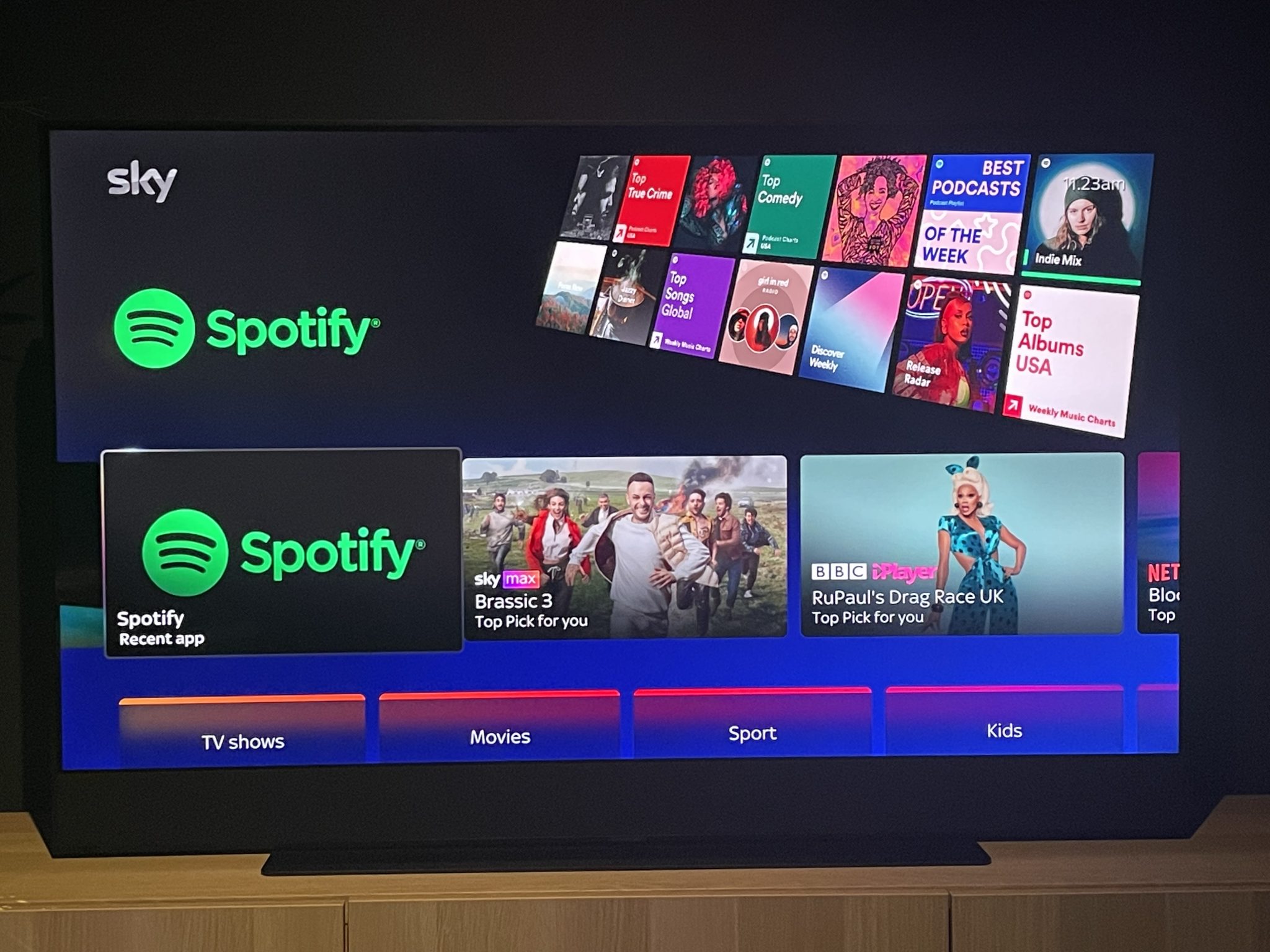 Now that it is a TV maker however, Sky is no longer the gateway and is instead a gatekeeper.

The number of apps available on the Sky Q platform presents users with a solid base of services, but it’s no secret that it is far more restrictive than other streaming device makers or TV OEMs.

There is no app store on Sky Q. What you see is what you get, and you can’t search for additional apps or services. Should the operator decide that it has no interest in getting into business with a streaming partner (see BritBox) then Sky Glass customers will be forced to purchase an additional streaming stick in order to access it.

Sky maintains that it will implement apps and features that it feels its customers want, but this will inevitably favour larger streamers with a broad offering at the expense of more speciality offerings. Unless Sky drastically changes its approach, it’s hard to see a world in which a niche service like AMC Networks’ horror streamer Shudder, or the arthouse-oriented Mubi find a home on the Sky platform.

Apple TV, which has a similar goal to aggregate content alongside its premium TV+ SVOD, also seems unlikely to ever make its way to Sky Q or Sky Glass.

For smart TV owning Sky Q customers, this has not been too much of an issue. TVs running operating systems like Android TV, Samung’s Tizen and LG’s WebOS have access to hundreds of apps via their respective app stores. Removing that and railroading users through the Sky platform however will make access and exposure to these apps far more difficult.

Sky would ultimately argue that users can still access all the apps that they want via an HDMI-connected streaming device, but this will remove many of the core features that people will be investing in Sky Q for – namely the discoverability, aggregation and voice search functionality.

The messaging from Sky has been about reducing the amount of time users spend looking for content and increasing engagement with shows and movies available not just from Sky but from third-party streaming providers like Netflix and Disney+.

However, the quiet hope for Sky is that Sky Glass can be a churn killer in the age of cord-cutting.

Sky Glass is the next evolution of the Sky service for sure, but it is of little surprise that the company has taken such a huge step forward since Liberty Global and Telefónica completed the merger of Virgin Media O2. (It just so happened that approximately five hours after Sky wrapped up its launch event, I received a ‘save the date’ email from the newly formed mega telco for an unspecified product launch.)

There is little competition to Sky’s pay TV service in the UK as a premium product. Virgin’s TV 360 set top box already looks outdated less than a year after it launched, while services from the likes of TalkTalk and BT are, realistically, cheaper options for consumers who have lacked the budget or capacity to take on Sky’s satellite service.

Not only is Sky removing that dish-shaped barrier to entry with Sky Glass, but it is putting its offering at the inescapable centre of the living room.

Taking on a pay TV service with a years-long contract is already a commitment, but making the TV itself a subscription practically guarantees that households will be Sky customers for life. 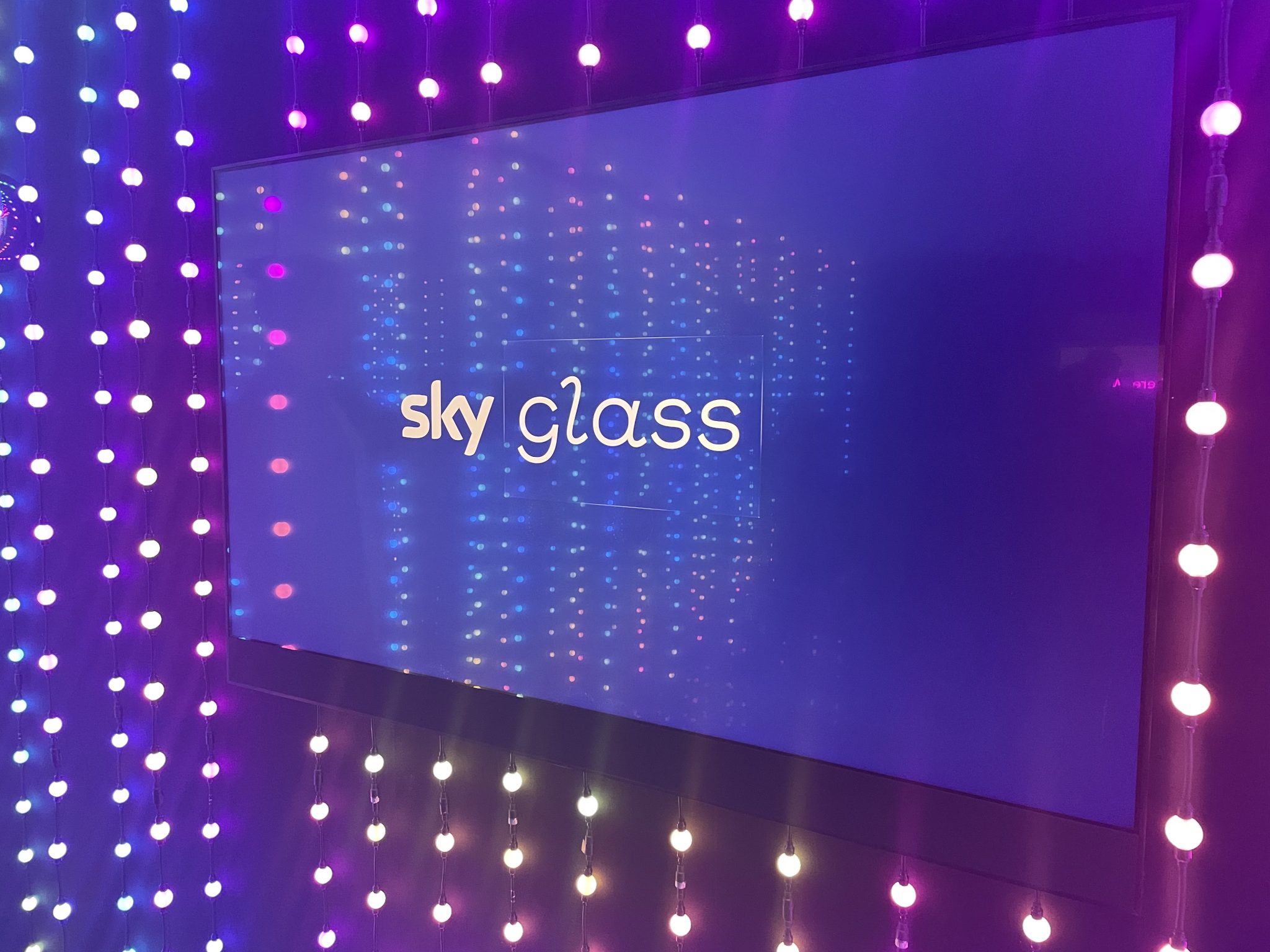 The user experience of Sky Glass is very slick from first-hand experience, and the integration between apps and Sky’s own content delivers on the company’s long-held super aggregator aspirations. But the bare minimum that customers are expected to pay is £26 per month for the Sky Ultimate TV package which bundles a base offering of Sky channels with Netflix. To make the most of Sky Glass’s UHD and Dolby Atmos features for Sky’s own channels the operator demands an extra £5 per month, while Sky Sports, Sky Cinema and Sky Kids are all additional add-ons.

In the event that a subscriber decides to unsubscribe from Sky, they will still be able to use the TV, access apps and HDMI-connected devices, but key functions like voice control, personalised content recommendations and the aggregating My Playlist function are restricted to paying customers. Sky Glass will only be available to Sky customers (and at launch solely through the operator itself), but some more cautious TV buyers may think twice before committing themselves to the subscription.

Sky isn’t really looking for those kinds of customers though. The initial push for Sky Glass will inevitably be towards the loyal subscribers who have been Sky customers for years and have no intention of leaving any time soon – much akin to how device makers like Apple sell their devices.

Similar to the mobile model, Sky is also bringing the Swap business model of its mobile unit to the smart TV, allowing customers to regularly upgrade their device as and when new units come out at no additional upfront cost. (The only cost of this model for users is that upgrading to a new device will reset the 24 or 48 month contract back down to zero.)

It may be mixing metaphors to call the service sticky and a walled garden, but Sky Glass will ultimately look to remove the concept of cancelling a subscription from the end-user’s mindset by creating an experience which both Strong and Stephen Van Rooyen, Sky EVP and CEO, UK & Europe, described as “far more than a TV.”

More than a TV

The tone of this piece may come across as more damning than praising, but this is only to provide an injection of realistic concern into what was otherwise an impressive product reveal. 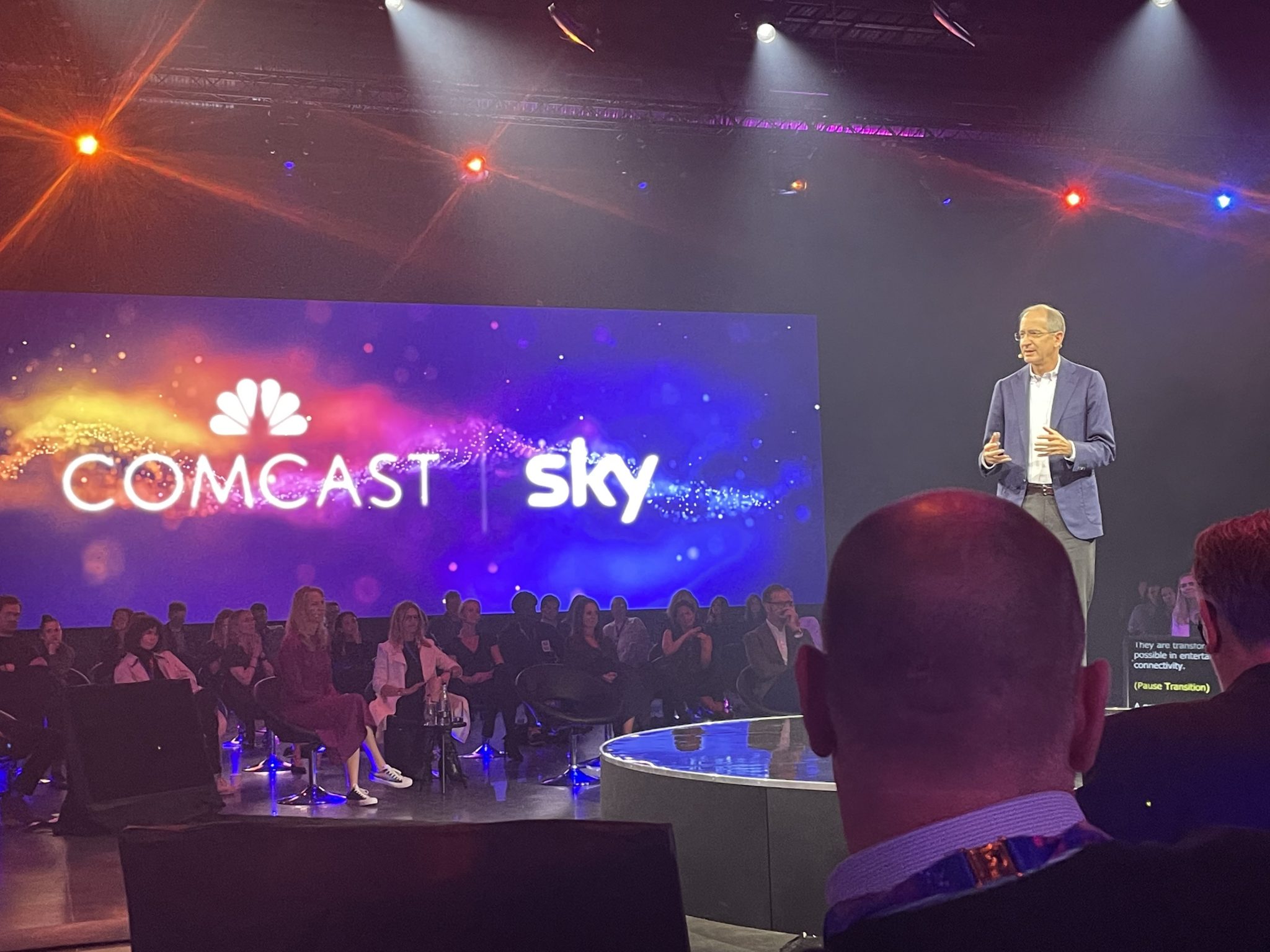 The Sky Glass user experience is slick, the picture quality rivals equivalently priced sets on the market and its sound quality is so good that you can forget that you don’t have an additional soundbar or stereo speakers installed.

And ultimately my presented concerns around a lack of access to apps are unlikely to be shared by the majority of Brits. The millions of UK-based Netflix and Amazon subscribers will be satisfied by their integration into Sky Glass, and the average viewer will never be short of something to watch whether it is from Sky or a third-party provider.

Through their presentations, the executives of Sky along with Comcast CEO Brian Roberts all reiterated that core idea that the smart TV conceptually has untapped potential. Sky Glass presents one view of the future of the TV itself as a service and as the entertainment hub of the home.

The business case is compelling, but it’s up to the target audience to decide whether the sacrifices around control, access and cost will be worth it for them in the long run.