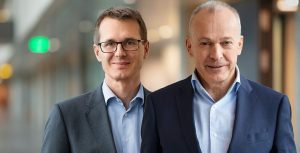 Swisscom has named Christoph Aeschlimann as its new CEO, replacing Urs Schaeppi, who will step down from the role on June 1 after nine years at the helm of the country’s largest telco.

Aeschlimann is currently head of infrastructure, network and IT at the telco and has been a member of the group executive board since 2019.

Prior to joining Swisscom he worked for financial services provider Odyssey and software developer ERNI, latterly as CEO.

Announcing the move, chairman Michael Rechtsteiner paid tribute to the contribution of Shaeppi, who worked for the telco for 23 years and who oversaw, among other things, the growth of the company’s TV offering, Bule TV, which increased its customers base by 60% on his watch.

“I have had a wonderful time in the most exciting industry and one of the most fascinating companies in Switzerland. From the emergence of mobile phones in the 90s to the sophisticated smartphone, fast networks and cloud data, technology and the way we communicate have changed tremendously, both privately and in business. Now is the right time for a change. It has always been a privilege and a great pleasure for me to have experienced this rapid development at such close quarters and to have played my part in it. I would like to thank all the employees, customers and partners for the trust they have placed in me. I will of course stay in touch with the many colleagues at Swisscom and in our industry,” said Shaeppi.

“I am very much looking forward to my new . As Urs Schaeppi’s successor, I am aware that I have some very big boots to fill and high expectations to live up to. I am delighted to accept this challenge and know I can rely on an outstanding management team. Working alongside my 20,000 motivated Swisscom colleagues, I am ready to give the best for our customers,” said Aeschlimann.