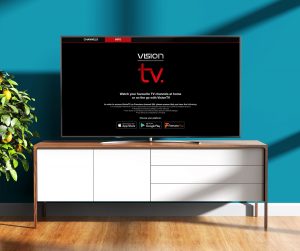 Channel aggregator Vision247, which distributes a range of services via connected devices on the UK Freeview platform, has launched an  HbbTV offering that will run alongside its legacy MHEG apps. VisionTV went live as an HbbTV App one week ago and can be found on Freeview channel 264.

The MHEG version of the service has been available in the UK since 2012, available on MHEG compatible Freeview and Freeview Play devices, VisionTV’s website www.visiontv.co.uk and via VisionTV Mobile Apps on iOS and Android devices.

The launch of the new HbbTV app means that it is now additionally available on HbbTV compatible devices, allowing more Freeview and Freeview Play viewers to access it.

Vision247 offers 49 IP streamed channels from across the world, including some services that are exclusive to VisionTV in the UK, free of charge.

Following the launch of the HbbTV app, Vision247 Limited predicts it will pass the milestone of four million hours viewing during 2022.

“More than 18 million UK households access TV via Freeview, and this new development and evolution for VisionTV as an HbbTV App is a significant development and illustrates our commitment to meeting the changing media consumption needs of both our clients and viewers as well as keeping abreast with industry standards and technology. It will enable additional viewers the opportunity to discover a world of free to air TV channels from across the globe, at absolutely no cost to the viewer,” said Doris Ojo, CEO of Vision247 Limited.