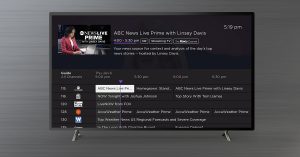 Roku has announced a major update to its OS in how it presents live channels.

The company has introduced a new Live TV Zone which serves as a hub for all live and linear content. Roku’s Live TV Channel Guide, which previously was a standalone channel, will be housed within the zone, while third-party services such as YouTube TV, fuboTV and Hulu + Live TV will also be accessible in the hub.

This is the latest live TV-oriented feature upgrade for Roku OS. Last year, the company expanded voice command support for the live TV guide, while also adding more than 200 free channels to The Roku Channel.

Despite the ongoing shift towards non-linear TV consumption, Roku cited a recent streaming survey it carried out which claimed that 61% of users without traditional pay TV still watch live news at least multiple times a week.

The survey, published in late 2021 in conjunction with the National Research Group (NRG), examines consumer attitudes and habits towards streaming and overall TV consumption.