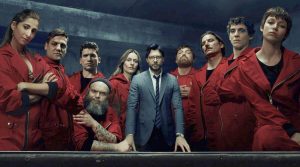 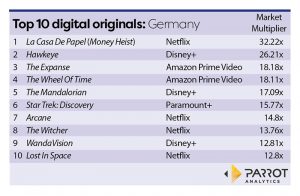 However, other than La Casa De Papel, Netflix only managed three other titles in the top 10, all at the lower end, with Arcane, The Witcher and Lost in Space taking the number seven, eight and 10 slots.

Amazon Prime Video secured the number four and five slots with The Expense and The Wheel of Time, while Disney+’s The Mandalorian took the number five position.

The number six slot went to Star trek: Discovery, the fourth season of which was pulled from Netflix by ViacomCBS in favour of its own streamer Paramount+, which has yet to launch in Germany. However, German fans of the series are currently able to watch episodes on ViacomCBS’s linear free ad-supported streaming television (FAST) service Pluto TV.