Android TV is set to increase its share of a declining pay TV set-top base fivefold over the next five years, with a proprietary operating system from Huawei also predicted to rise, according to a report by Rethink Research. 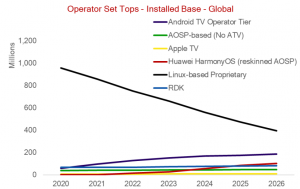 Rethink estimates that pay TV households will decline from around 921 million globally in 2020 to 680 million in 2026, with annual shipments of operator set-tops falling from 242.6 million to 184.8 million, propped up by the upgrade cycle for new Set Top Box operating systems.

Over the same period, operators are expected to turn away from  Linux-based proprietary set tops, with the market share of these systems falling from around 85% in 2020 to 48% in 2026.

Rethink expects Android TV and Huawei’s HarmonyOS set tops to fill the gap, with RDK making some progress in Europe and retaining its hold on the US market, according to the research outfit.

The research outfit believes that HarmonyOS, seen as the most likely candidate for a national OS for China to compete with Android, will benefit from the ongoing trade dispute between China and the US at the expense of Google’s system, although Huawei is expected to continue to deploy Android in the short term.

Globally, Android TV Operator Tier will grow from around 5% of the installed operator set top base to some 23%, in 2026, according to Rethink, with. RDK growing from 6% to 10%.

Linux is also set to decline in the world of smart TVs and CTV devices, as LG’s WebOS, Samsung’s Tizen and Roku’s platform lose ground to Android TV and HarmonyOS. Android TV is predicted to reach a 25% share of the smart TV and connected TV devices market by 2026, representing an estimated 236 million of a total 905 million devices.