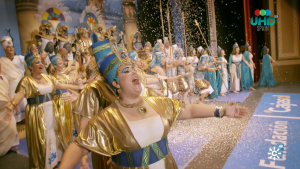 The non-profit association UHD Spain, which was founded in January by with 30 industry partners, has kicked off simulcast UHD HDR and SDR demonstration broadcasts via terrestrial, satellite and streaming.

UHD Spain said that this first simulcast consolidates its commitment to develop a collaborative framework around new audiovisual technologies, and in particular UHD, to demonstrate to the industry and the general public the potential of this standard.

Mediapro, a UHD Spain member, is broadcasting the content from its studios in Barcelona with Vector3 continuities provided by NRD and encoding systems from SAPEC.

From Overon, UHD HDR and SDR signals are collected for distribution in different media Hispasat is responsible for satellite broadcasting; Cellnex, Axion, and Telecom CLM distribute the signal via DTT.

The official website of UHD SPAIN is in charge of the Internet broadcasting, for which Ateme provices encoding of the content and Dolby has provided its experience and infrastructure for the implementation of the first demonstration.

“The aim of the partnership is to create a collaborative platform for the audiovisual industry and Ultra High Definition content creators, and to bring UHD HDR and SDR content to all viewers so that they can enjoy and see the value of this technology. We are very satisfied with the result of the joint coordination work between different companies and organizations of the association and this first demonstration. We are already working on other interesting initiatives to promote this technology,” said the president of UHD Spain, Pere Vila, from RTVE.