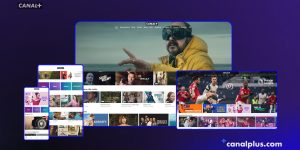 The group has created a dedicated app for Samsung TVs, with additional functionalities including the ability to switch between channels using the TV remote and create and manage individual user profiles.

Canal+ said that the profile function would be extended to other platforms on which the service is available soon.

The Samsung app can be downloaded from the app store for Samsung TVs produced in 2018-21 with the Tizen 4.0 and later operating systems, including the latest QLED and Neo QLED models.

The service is also available via the web, iOS and Android devices, the Canal+ 4K set-to p and on Android TV and Apple TV devices. AirPlay and Google Cast technology is also supported.

The service is available for PLN45 a month, with the first month available for PLN20. Other otions include HBO for PLN55, an entertainment and news package for PLN65, and Eleven Sports – which includes LaLiga, Serie A and Ligue 1, Formula 1 and speedway, for PLN55.

In May, Canal+ added 40 new channels to the online service, including channels from Polsat Group, Discovery and Fox.