Half of Spanish home with internet access now consume paid-for streaming video, according to the latest statistics published by markets regulator the CNMC. 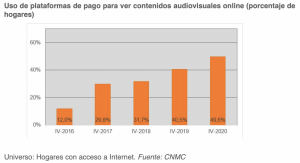 The CNMC found that some 53% of Spaniards watched audiovisual content online at least once a week, with a majority of individuals– 57.5% – watching short-form content. Episodes of series accounted were viewed by 50.3%, and movies were watched by 41.1%.

The CNMC’s regular study of Spanish internet users also found that nine out of 10 habitually accessed the web via mobile devices, as was the case a year previously. The number accessing the internet via desktops had fallen slightly in the meantime, from 34% to 32%, while the number accessing via laptop had risen from 49.5% to 54%. The number of Spaniards accessing the web via television also increased, from 17.1% to 19.4%.