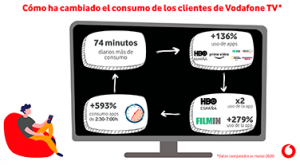 Vodafone España has seen use of its TV service increase by over a third since the COVID-19 pandemic struck, with a big shift to nocturnal viewing and a drop in viewing of digital terrestrial channels.

The company said that use of Vodafone TV had increased by 34% since March 2020, with the biggest increase in viewing happening between midnight and 07:00. The average TV customer now watches 74 minutes more of airtime than a year ago.

Consumption of DTT channels has meanwhile dropped by 5%, with a shift towards pay TV.

Use of third-party apps form the likes of HBO España, Filmin, Netflix, Amazon Prime Video and YouTube has grown from 33 top 77 minutes a day on average, an increase of 136%. While use of such apps has grown at all times of the day, the biggest jump was between 02:30 and 07:00, when usage increased by 593%.

HBO España benefited from the success of series including Patria and 30 monedas, while movie service Filmin saw usage increase by 279%, with a 20% increase in subscriptions on the Vodafone platform.

The increase followed Vodafone’s decision in February last year to open up access to its TV service to mobile-only customers, who can view the service via the Vodafone TV app without the need for a set-top box. Vodafone TV is available via smart TVs, smartphones and other devices including Chromecast and Amazon Fire Stick. In total, some 200,000 customers have signed up for the box-less version of the service, with a25% increase in the number of devices connected over the last. Year.

Vodafone TV added 46,000 customers in the quarter to December and has around 1.564 million subscribers across Spain.