Pay TV providers have a narrow window to make the shift to become aggregators of OTT apps rather than traditional pay TV packages before accelerating cord-cutting outside the US undermines their business model, according to a report by DTVE sister research outfit Omdia. 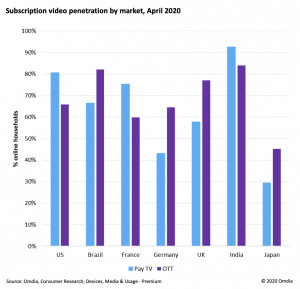 “Timing is everything, because cord-cutting is now spreading beyond the US and will be increased by the COVID-19 pandemic, which coincided with the launch of direct-to-consumer (D2C) services from globally recognised brands,” said Fateha Begum, principal analyst, TV, video and devices at Omdia and author of the report, Trends to Watch: Consumer Trends in a Connected World.

“Pay TV operators must act quickly to retain their customer bases and drive the value of their offerings and services. Pay TV operators still benefit from wide reach and ownership of a high-powered media device: the set-top box. The STB represents a key connected device in the home, one that is managed by the pay TV operator and is a key driver of value perception for pay TV against OTT services.”

Omdia predicts that among new studio-backed D2C services, Disney+ will lead the way, signing up 95 million customers by 2024. It predicted that Disney Channel, the studio’s premium pay TV offering, will see subscriptions decline by 2% to 382 million over the same period. Other players will trail behind this by some way while still signing up substantial numbers of subscribers.

said that the “transition from pay TV to OTT video occurred faster than forecast” during the pandemic, although it predicted that the rate of OTT signups will slow down next year.

The inability of pay TV providers to install equipment in homes has also benefited OTT providers, it said.

The report noted that OTT penetration is now higher than pay TV in markets including Brazil, Germany, the UK and Japan, and catching up in the US, France and India.

Begum said that pay TV operators should focus on the value of the set-top as a key device in the living room with advanced functionality, reinforcing its value by creating a hub for the aggregation of multiple services.

According to Omdia, there will be over 500 million connected set-tops globally by 2024, including 107 million in western Europe, 87 million in North America and 294 million in APAC.

Functionality such as the ability to see recommendations outside of the content provider’s app will be key, said Begum.

Pay TV operators also have the benefit of rich consumer data that the majority of D2C services currently lack, she said.

For content owners launching OTT services, the risk is that the strong growth experienced during the COVID-19 pandemic will be followed by high churn once the pandemic subsides.