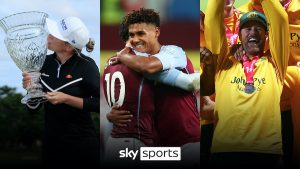 Sunday October 4 was a record-breaking day for Sky Sports, the pay TV broadcaster has said.

With a bumper lineup of sports coverage, the broadcaster cited BARB stats to say that over 14 million people watched more than 95 minutes of programming on the day. Across its channels, Sky Sports charted an average of 933,000 viewers throughout the day, representing 11.7% of all TV viewing in the UK.

The peak was at 4:55 pm BST, when 3.3 million viewers were watching one of the channels. Sky said that this was 25% of all TV viewing at the time.

The main event of the day was a double bill of English Premier League upsets, where visitors Tottenham thrashed Manchester United 1-6 at Old Trafford and Aston Villa scored a massive upset 7-2 defeat of champions Liverpool at Villa Park.

Other popular events included Notts Outlaws’ victory over Surrey to win the T20 title, Mumbai Indians defeat of the Sunrisers Hyderabad by 34 runs in the Indian Premier League, coverage of the European Tour golf climax, and matches from the NBA and NFL in the US.

Sky Sports managing director Rob Webster said: “These viewing numbers show the importance of sport to our viewers. At a time when the UK is spending more time at home, I’m delighted that our teams are able to showcase a choice of world-class sporting content from around the world.”

The announcement comes just after a report said that viewership of Sky Sports’ coverage of the English Premier League was starting to decline. The report suggested that audiences are starting to grow tired of the novelty of the league’s blanket coverage, with crowds still not able to attend matches in person.