150,000 stream EFL, but revenue only a third of typical match day receipts 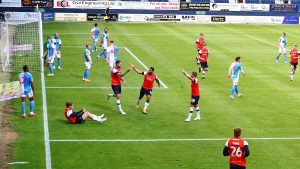 Some 150,000 football fans live streamed the English Football League (EFL) over the opening two match days of the 2020/21 season.

The EFl, which operates the second, third and fourth tiers of English football, agreed a deal with Sky Sports in August which allows all non-broadcast matches to be directly streamed by clubs while stadiums remain shut. Season ticket holders are given access at no additional cost, but non-season ticket holders are able to pay £10 per match.

While the figure represents an uptick over typical EFL viewing figures, the Daily Mail reports that the streaming audiences only represent 40% of the clubs’ combined average matchday attendances.

Perhaps more concerningly, the report also adds that this streaming revenue only amounts to a third of the clubs’ usual gate receipts.

Clubs in the English Premier League could be allowed to follow the same model, should they agree to reduce the number of matches being broadcast to typical pre-pandemic levels. It is understood that this is a preference of the league which is currently seeing its existing rights deals devalued by the dramatic increase in matches, and of clubs who are facing a £540 million shortfall from match day revenues.

The Mail estimates that allowing Premier League clubs to stream their non-broadcast matches could generate tens of millions of pounds in revenues, though critics have argued that this would unfairly penalise supporters of mid-table clubs who see few of their matches broadcast.