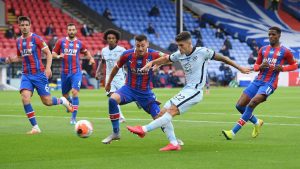 The English Premier League, which is set to kick off its 2020/21 season next month, will make an additional 20 games available on TV as fans continue to be restricted from attending matches.

Due to ongoing health concerns, fans will not be permitted into stadiums until October at the earliest. However, the league will not broadcast all the matches played behind closed doors as was the case with the condensed 2019/20 season end.

To compensate, the league is meeting fans in the middle with an extra 20 matches broadcast live on TV.

Of the total, Sky Sports will carry 12, BT Sport will have six and Amazon will have an extra two matches.

This will take the total number of matches broadcast on live TV to 220 for the upcoming season.

The news will also mean that the BBC, which was handed four matches as a part of Project Restart, will not carry any matches and will instead revert back to showing its Match of the Day highlights show.

While not having the budget to compete for the league’s rights, the BBC’s brief stint of showing top-flight football proved successful, with its broadcast of Southampton vs Manchester City becoming the most-watched Premier League match ever.

The Saints’ upset 1-0 win over the Citizens July 5 attracted a peak audience of 5.7 million across all platforms, including the BBC Sport website. This figure is significantly higher than the peak of 4 million that watched the 2012 Manchester derby on Sky Sports.

With fans only likely to be permitted back into stadiums at a limited capacity as the season goes on, PP Foresight tech, media and telco analyst Paolo Pescatore believes that sports broadcasters will benefit. He said: “Expect a boost in sports subscriptions ahead of the new season. This will provide a much needed boost to revenues for sports broadcasters who have been hard with the pandemic over the last few months. Therefore, expect a frenzy of bundles and punchy offers to lure fans.”