French broadcaster TF1 is to revamp 4K UHD channel on August 23 and has said that the offering will be distributed by Orange and Bouygues Telecom. 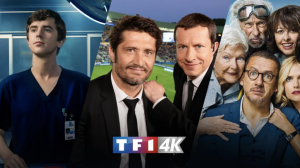 The channel will offer a broader range of multi-genre programming, including movies such as 50 Nuances Plus Claires (50 Shades Freed) and La Ch’tite Famille, series including the return of The Good Doctor and a range of sport including the final of the UEFA Champions League – which will take place on the day the revamped offering becomes available and to which TF1 has the right to air free-to-view – and France’s national team’s matches including one against Croatia on September 8.

TF1 said that the launch of the new programming offer underlined once more its goal of “offering its TV viewers the best television experiences, thanks to an exception broadcast picture quality”.

Orange viewers will need to have a TV4 or TV UHD set-top from the operator, while Bouygues Télécom subscribers will need a 4K, Bbox Must or Bbox Ultym decoder to view the channel.

Advertising revenue fell by over a quarter compared with last year, down to €586.1 million, with advertisers withdrawing campaigns from the onset of France’s lockdown in March. TF1 said it had seen a slow comeback of advertisers particularly in the fields of telecoms, e-commerce and health.