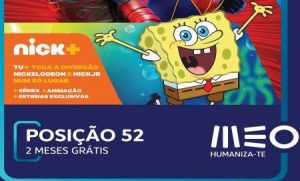 Meo has become the first Portuguese operator to add ViacomCBS’s Nick+ service to its line-up of premium offerings.

Nick+, which kicks off with new series It’s Pony (É o Pónei) and features content including Paw Patrol (Patrulha Pata}, Henry Danger and Spongebob Squarepants, is available free of charge for two months for taking the service before September, after which it will be available for €2.99 a month.

Meo already offers a range of kids services including channels such as Nickelodeon alongside apps including Meo Kids, Study at Home and Zoo.

AXN Now content will have a dedicated space in the NOS Play line-up, offering complete seasons of shows and exclusive premieres, with over 700 series episodes promised before the end of the year.

The addition of AXN Now at no extra cost to NOS Play customers will bring series including The Good Doctor, The Rookie, Diggstown and Mr Mercedes to subscribers. Shows including the third series of Absentia will be available only three days after their world premiere.

NOS offers NOS Play as an SVOD service for €7.50 a month. The service is available on tablets and smartphones and recently launched on Apple TV.