UK consumers now watch an average of one hour and 30 minutes of streamed content each day and pay for an average of two streaming services according to a consumer survey by Musicmagpie. 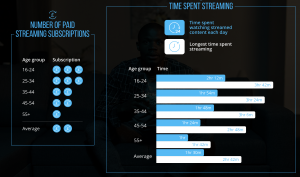 The survey found that 16-24 year-olds streamed an average of two hours and 12 minutes, with time spent streaming dropping among older age ranges down to one hour for over-55s.

Users paid for an average of two services, ranging from three among 16-34 year-olds down to one for over-55s.

Some 51% of people reported increasing the amount of content they streamed since lockdown began, while 21% have purchased physical media since the lockdown started. Over half of respondents reported re-watching one or more series.

The number of shows watched consecutively per sitting ranged on average from five in the 16-34 age range down to one for over-55s.

The most-watched show in the UK is currently Sherlock, seen by 55% of respondents, followed by Peaky Blinders with 53% and Game of Thrones with 51%.