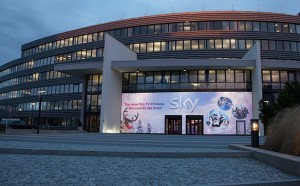 The new Entertainment and Cinema Ticket will include Sky Originals, HBO series and a range of over 1,000 movies in a single offering for €14.99, with a 25% discount for the first month for new customers.

Series available now and in the near future include Gangs of London, set to debut on July 23, Perry Mason, Euphoria, Penny Dreadful, City of Angles, Rick & Morty, Westworld and Game of Thrones as well as movies including Joker, Der Fall Collini and Zombieland: Double Tap.

Sky says it has also improved the user interface of the service to make it easier to find content that is ordered by relevance.

The launch of the new package is the latest in a series of innovations that Sky has introduced in Germany in recent months. The pay TV operator has recently made two parallel streams available to viewers that can be viewed on up to five devices, with the option to switch the list of devices five times each month.

Elke Walthelm, EVP of content at Sky Deutschland said: “With the new Sky Ticket, it is now even easier to stream exclusive Sky series and the latest cinema blockbusters. We have combined both for the first time in one ticket and with an optimised user interface. This makes it more convenient than ever for our customers to be the first to stream the content they love.”