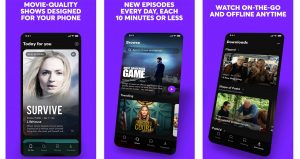 Eko took action against Quibi in March, alleging that the high-profile short-form video streamer stole technology used for Turnstyle, which switches video from vertical to horizontal formats in real time for mobile users. Eko’s lawsuit claimed that the company shared its technology with Quibi employees bound by non-disclosure agreements.

The US court has however denied Eko’s motion for a preliminary injunction in its case against Quibi.

The judgement said that Eko’s motion “fails to make a sufficient showing of irreparable harm to Eko’s reputation and goodwill because of the technical implementation of Turnstyle that allegedly resulted from misappropriation of Eko’s claimed trade secret Mobile Device Optimized RTS” and that “Eko’s evidence of alleged confusion among distributors and partners is unpersuasive”.

The judgement said that, in giving evidence, Eko chief business officer Ivy Sheibar had failed “to identify what particular distributors or partners have articulated such confusion or to provide evidence of such confusion”.

It said that the positive reception of Quibi’s platform at this year’s CES, cited in evidence by Eko, was “insufficient to establish irreparable Harm” to Eko’s reputation to support a preliminary injuction against the streamer, noting that Quibi had focused primarily on the quality of its content to market the service.

The ruling also said that Eko had failed to establish that two of its existing commercial relationships had been harmed by Quibi’s launch, or that the company had suffered from negative consumer perception as a result of Quibi’s launch.

It also dismissed the claim that Eko could suffer reduced access to funding constituted immediate and irreparable harm or that Quibi had properly investigated whether Quibi’s feature was based on its own technology.

The court concluded that Eko had failed “to meet its burden to demonstrate the likelihood of irreparable harm” to its business.

The Wall Street Journal reported in May that activist investor Elliott Management had offered financial support for the intellectual property infringement lawsuit in exchange for equity in Eko.

“We are extremely pleased the Court ruled today that Eko has not presented a credible case for a preliminary injunction. Eko has no case against Quibi – this is a frivolous lawsuit brought by a company and CEO looking for a payday. We will continue to aggressively defend ourselves,” said a Quibi spokesperson.