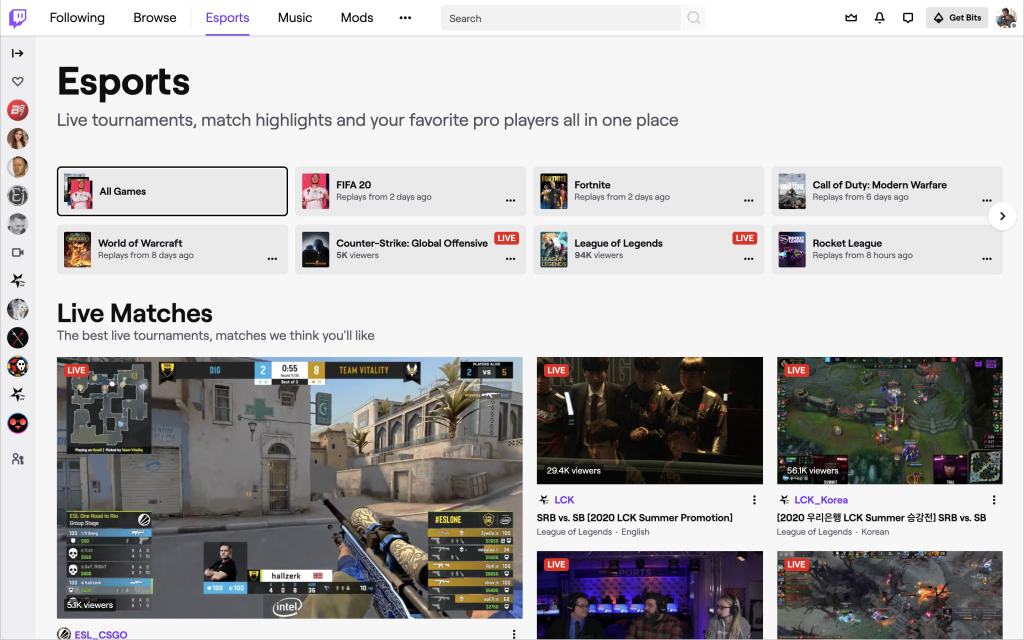 Twitch may be the world’s leading video game streamer, but esports – despite being one of the biggest draws for viewers to the Amazon-owned service – has mostly been underrepresented and can be difficult to find on the platform.

The company is now looking to rectify that with the introduction of a dedicated esports directory as its own tab within the Twitch platform on PC. The feature is not yet available on Twitch’s smart TV and mobile apps, though it will likely be patched in at a later date.

Within the Esports tab, users are presented with suggestions of games to watch, based on their viewing habits and pro gamers who are streaming live within those titles, be that in competitive play or just on their own channels.

The section also shows a number of live matches and tournaments, suggested again on viewing habits, and replays and highlights of previous events.

This comes at a time when other platforms like Mixer and YouTube are increasing their focus on esports. The latter signed an exclusive esports streaming deal with Overwatch and Call of Duty publisher Activision Blizzard earlier this year, estimated to be worth approximately US$160 million.

It also comes as interest in esports is skyrocketing due to a combination of both genuine growth in the nascent medium and the coronavirus pandemic which has effectively brought the mainstream sporting world to a standstill.

Louise Shorthouse,  analyst at Omdia, believes this could be a “significant moment” for esports. She says: “Previously, it had been quite difficult for consumers to keep track of what events were happening, when, and where. The kind of exposure offered by a Twitch esports directory – especially one which is personalised and driven by individual viewing history – is huge. COVID-19-driven lockdowns will obviously boost engagement and support greater visibility for the directory, helping to establish a strong initial user-base which is likely to carry through into the post-lockdown world.

“Discoverability is still a considerable factor in terms of esports viewership numbers. There is a huge number of first- and third-party events – there were upwards of 250 DOTA 2 tournaments in 2019 globally – and yet very little in terms of easily-accessible, structured timetabling that consumers can rely on to guide them. As a result of Twitch’s new esports directory, such tournaments are likely to see a healthy boost in viewership and broader engagement, which may well extend to the games themselves.”

Outside of esports and gaming, Twitch is quietly growing as an all-around live streaming platform. The ‘Just Chatting’ category has historically been one of the most popular on Twitch, while many creators and artists have taken to the streamer amid the global lockdown.

This has been reflected with the recent addition of a ‘music’ tab to sit along esports, with musicians ranging from bedroom hobbyists to mainstream acts like Panic At The Disco using the lockdown to connect to their audiences with live performances.