Multiple iPhone users have received push notifications promoting the company’s new Apple TV+ SVOD service that they say are in violation of the company’s own guidelines, Digital TV Europe understands. 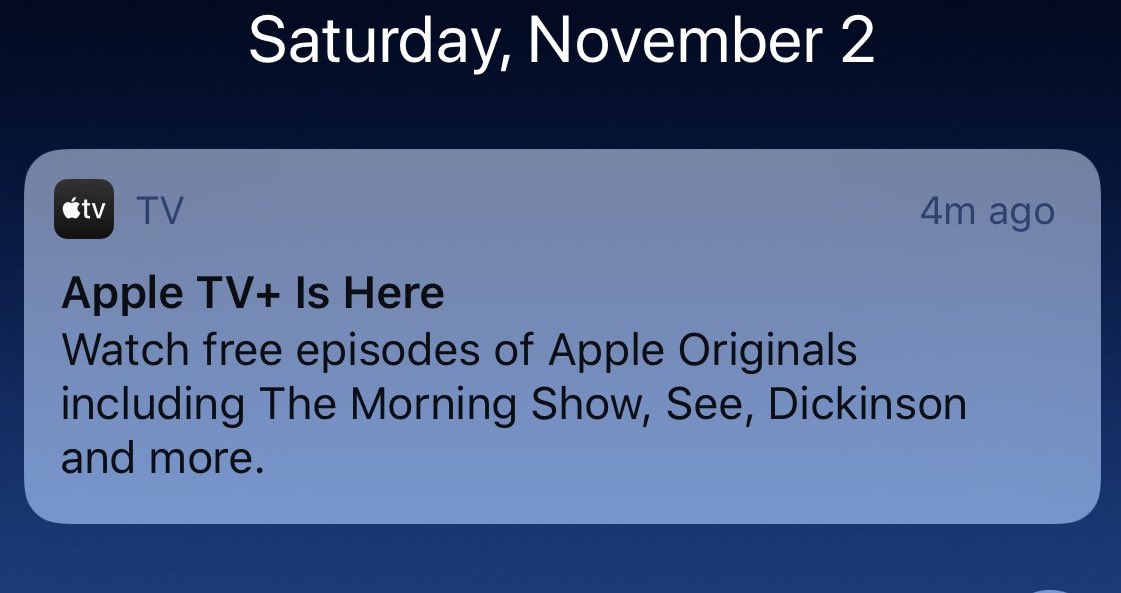 The notifications were first spotted by Thijs Niks, a senior product manager at Uber, who Tweeted a screenshot of his iPhone lock screen which had a notification promoting the service.

The message on the phone said: “Apple TV+ Is Here – Watch free episodes of Apple Originals including The Morning Show, See, Dickinson and more.”

Another user posted a screenshot of the same notification, commenting that Apple is “a sad thing” and that it has been “reduced to notification spam about their TV shows.”

A further Twitter user also reported that they received a similar push notification which prompted them to “Start Your Free Year of Apple TV+.” Apple is offering a year’s free subscription to customers who bought a new Apple device after September 10, though this particular user claims that they did not purchase a new product.

The user said: “This is false and spam advertising @AppleSupport shame on you twice, it tells me I can unlock 1 year of Apple TV+ then it says 7 day free trial. I didn’t buy anything since September.”

These notifications only appear to be coming through to users who have the Apple TV app installed on their phone. The app comes pre-installed with new iPhones and was added in an iOS update a while ago, meaning that users have had to uninstall the app in order to opt out.

While third party apps like Netflix request push notification permission, the Apple app does not, meaning that the message was unsolicited with no way of preventing it.

The notifications bring into question Apple’s own app store rules, with section 4.5.3 of Apple’s App Review guidelines stating that developers should not send, “spam, phish, or … unsolicited messages to customers, including Game Center, Push Notifications, etc.’”

Some observers have noted that Apple’s actions create an unfair playing field. Owen Williams, a journalist at Shopify, Tweeted his concerns: “An app that comes by default, sends a push notification that is banned by Apple’s own app terms and conditions which means it has a competitive advantage over literally any other app…I totally can’t see the problem.”

This is not the first time that Apple has utilised push notifications to promote its new products or services.

Users had previously reported receiving notifications prompting them to upgrade to a new iPhone, sign up for Apple Music or watch episodes of the Apple-owned Carpool Karaoke. Netflix utilises push notifications to promote new episodes and films that are relevant to the user, but some iPhone users appeared upset that they were having content promoted to them despite never showing an interest in the show, its stars or subject matter.

Apple did not respond to Digital TV Europe’s request for comment.

Apple TV+ launched in over 100 countries and regions on Friday. The service is available on Apple TV+ on iPhone, iPad, Apple TV, iPod touch, Mac, select Samsung smart TVs, Roku and Amazon Fire TV devices, as well as on the web at tv.apple.com.

New Apple Originals debuting in the coming months include series Servant, (November 28), Truth Be Told (December 6) and Little America, and movies Hala and The Banker.

“It was important for us to make it easy for everyone to watch across all their favourite screens, so Apple TV+ is the most broadly available Apple service ever from day one.”