Chromecast dominating down under 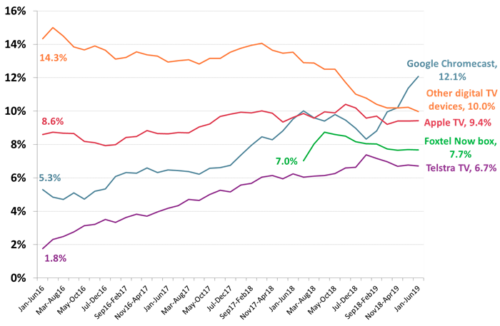 Chromecast is Australia’s most popular digital TV service, a new study has found.

Breaking the respondents into six segments based on their interests and use of technology, the study found that almost a quarter (23%) of technology early adopters – classified as such by their willingness to use new technologies, higher incomes and risk-taking tendencies – use Chromecast.

Roy Morgan CEO Michele Levine said: “Gone are the days when consumers were limited to programmes dished up by a small number of commercial and public television channels. Nowadays, households enjoy a large amount of choice in their viewing. Our data also reveals that more Amazon Prime Video, Kayo Sports, Netflix, Stan and YouTube Premium customers have a Google Chromecast service than any other digital TV device, which is consistent with many Chromecast customers being Technology Early Adopters.

“Given recent strong industry growth and the fact that digital services are still in their infancy, we can expect the proportion of Australians using Chromecast and other similar services to continue to increase rapidly in future years.”