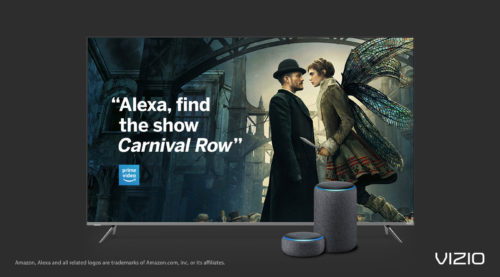 Previous Alexa capabilities available allowed viewers to perform basic functions such as powering their TVs on or off, changing inputs and playing or pausing video via a nearby Amazon Echo device.

The new update allows more content-focused options, with users able to search for films and TV shows by title, genre or cast members via voice. Users can also use voice to launch apps such as Prime Video or Hulu.

Bill Baxter, chief technology officer at Vizio: “At Vizio, we are always looking for ways to enhance the entertainment experience and bring more value to our customers. We are thrilled to offer improved SmartCast features not only to new customers, but for current Vizio SmartCast TV users as well.

“The timing couldn’t be better with the excitement around fall TV premieres because the new Alexa features give viewers more ways to easily find the content they love.”

Vizio has also announced additional compatibility with Google Assistant, which will provide basic functions like power on and off along with the ability to change picture modes and toggle closed captioning.