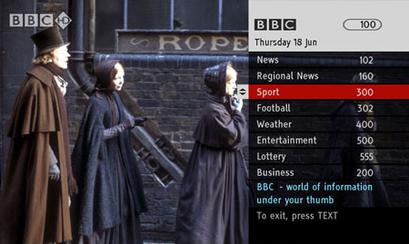 The BBC is switching off its Red Button news and sport service next year, the broadcaster has announced.

BBC Red Button served as the modern equivalent to Ceefax, which shut down in 2012, and allowed users to read news and sports content through their TV. The Red Button service launched in 1999.

While it is removing the text functionality of the service, the PSB confirmed that users will still be able to use the red button for feed selection for events like Glastonbury and Wimbledon.

A spokesperson for the BBC said: “From early 2020, viewers will no longer be able to access text-based BBC News and BBC Sport content by pressing red.

“It’s always a difficult decision to reduce services, and we don’t take decisions like this lightly, but we have taken it because we have to balance the resources needed to maintain and develop this service with the need to update our systems to give people even better internet-based services.

“Viewers can still access this information on the BBC website, BBC News and Sport mobile apps – as well as 24-hour news on the BBC News Channel.”