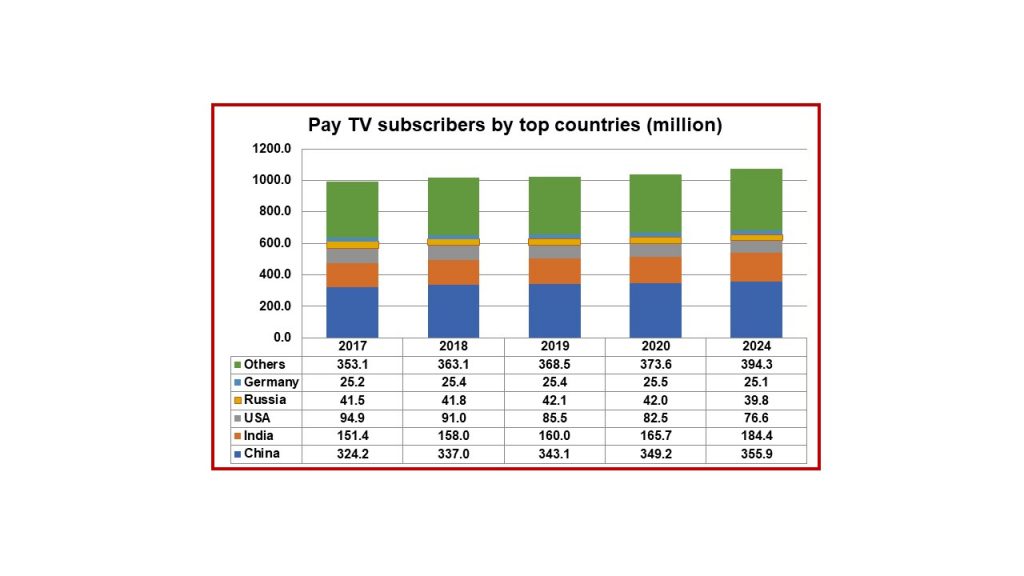 Pay TV subscriptions are set to rise by 60 million over the next five years.

According to a new report from Digital TV Research, the global total of subscribers will reach 1.08 billion by 2024. Despite this increase in subscribers, Pay TV revenues will fall.

It is estimated that China and India, markets where subscription costs and wages are much lower, will make up half the world’s pay TV subscribers by 2024. The report says that pay TV revenues peaked in 2016 at US$205 billion, and that this will fall by 17% to US$171 billion in 2024.

The report also points out that IPTV will see the greatest amount of success over the next five years, adding 100 million subscribers to reach a total of 357 million. Pay IPTV penetration will reach a fifth of TV households by 2024, up from 2.5% in 2010 and 15.4% in 2018.

Simon Murray, principal analyst at Digital TV Research, said: “We have updated our forecasts based on June 2019 reports. The US is the world’s worst performer – with no uplift expected over the next five years. Other countries will experience a slowdown – or even some small declines in subscriber numbers – but no other country will match the gloomy projections for the US.”