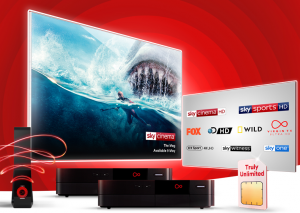 Liberty Global-owned Virgin Media has unveiled a set of new bundles that combine broadband and mobile deals in one single plan for the first time.

As part of the new bundle line-up, available from today, customers can also change their bundle every month.

The top-tier bundle is available at £99 for new customers on a 12 month contract.

Virgin Media is also introducing boost options to add a mobile SIM to any broadband bundle. When customers take a SIM they’ll also be rewarded with boosted broadband speeds that are faster than those included as standard in Virgin Media’s cable bundles, according to the operator.

By taking a mobile SIM – ranging from 2GB to unlimited data, texts and calls – average broadband speeds offered in boosted bundles increase from 50Mbps to 100Mbps, 100Mbps to 200Mbps and from 200Mbps to 350Mbps. Customers can change their mobile data allowance each month.

Each Pick includes Sky One, Sky Witness, Gold HD and Comedy Central HD as well as a selection of channels relating to each of the four genres, plus box sets.

Customers can add one Pick to their bundle for £10 per month with each subsequent Pick costing £7 per month.  Picks can be changed every month.

A Kids Pick is also available on Player and Full House packages for £5 per month. This includes 11 channels, such as Disney XD, Nickelodeon and the Cartoon Network, as well as many episodes available via catch-up and box sets.

Customers can also add a range of premium TV packs to their bundle such as Sky Sports, Sky Cinema HD and BT Sport, as well as subscribe to Netflix, Hayu and Starzplay.

Schüler said that there would be “lots more to come from Virgin Media later this year”.

Paolo Pescatore, tech, media and telco analyst at PP Foresight, said: “A major overhaul in its bundles represent a renewed drive to kick-start the UK multiplay market. This feels like multiplay v2.0 as most offers still rely on cross-selling additional services.

A unique differentiator will be speed along with flexibility. The premium all singing and dancing bundle is very punchy compared to rivals in terms of value. It feels like Virgin Media has taken the best of its rivals such as EE boost but for cable broadband and Sky TV packs for personal picks.”

Pescatore said that the move would put pressure on BT and Sky to integrate more services into a convergent bundle. More so given the huge focus on retention and reducing churn.”