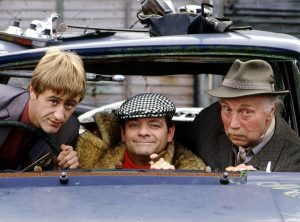 Only Fools and Horses

Sky and BBC Studios have struck a deal to bring a list of BBC comedy and drama box sets to Sky and Now TV.

From April, Sky subscribers will be able to binge on “hundreds of hours” of BBC content including classic series such as The Vicar of Dibley, Only Fools and Horses, The Royle Family, Little Britain and The Young Ones.

The titles will be made available  on Sky and Now TV under UKTV channel brands Gold and Alibi.

More recent series such as McMafia and Spooks will also make an appearance next month, with box sets of The Last Post, Father Brown and QI arriving later in the year.

BBC box sets will sit alongside box sets from Channel 4, as well as hits such as Game of Thrones, Big Little Lies and Westworld.

Rob Webster, group director of partner channels, Sky, said “Bringing all of these box sets together for the first time will cement Sky and Now TV’s reputation as the home of entertainment.

“It’s a great example of collaboration between Sky and BBC Studios, and we are pleased to be bringing our customers even more great British content.”

Marcus Arthur, president, UK & ANZ, BBC Studios, added: “We are delighted to have licensed this range of titles which Sky and Now TV customers will soon be able to enjoy under the much–loved UKTV channel brands.”