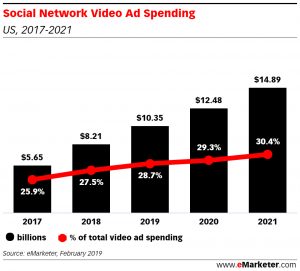 The research firm estimates that Twitter’s US video ad revenues will pass US$1 billion in 2021, while Snapchat’s US video ad business will grow 19.9% year-over-year in 2021, reaching US$727.4 million.

“Not only do younger users spend growing amounts of time watching video on these platforms, but they also share clips among their followers, potentially amplifying brand messages.”

According to eMarketer research conducted in the fourth quarter of 2018, 60% of respondents said they use Facebook to watch digital video, while 35% used Instagram, 21% Twitter and 18% Snapchat to watch video.

While YouTube is not included in eMarketer’s social network video ad spending forecast, 90% of respondents said they used the platform to watch video. The research sampled people aged 15 and over who watched digital video in the previous week.