Some 16% of US broadband households admit sharing passwords to their video service accounts, according to Parks Associates. 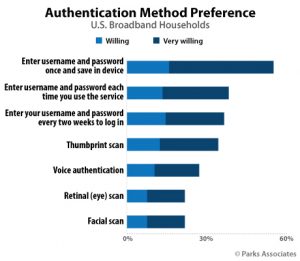 The research firm said that just one-third of US broadband households or less were willing to use a non-password authentication method such as voice or thumbprint.

Meanwhile, 54% of US broadband households said they were willing or very willing to enter a username and password once and save it on a device.

“Passwords represent risk for both users and service providers due to piracy and password sharing, but the password concept is ingrained in consumers’ conception of the online video experience,” said Billy Nayden, research analyst, Parks Associates.

“The push to staunch password sharing and piracy is driving initiatives where each interaction is graded based on prior user behaviour, using data points like geography, time, and watching behaviour.

“Grading ensures that interactions that need a high level of security receive it while routine interactions allow users a frictionless experience. The authentication process will become virtually invisible to users, except when they attempt to access services outside their normal behaviour.”