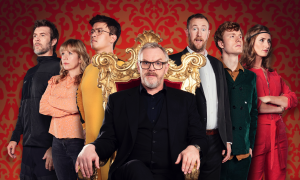 UKTV Originals topped 2018 ratings on six of the UK channel provider’s channels – Dave, W, Gold, Drama, Yesterday and Really and on UKTV Play – last year, while the top three shows on UKTV’s network were UKTV Originals, with Taskmaster, Death on the Tyne and Murder on The Blackpool Express attracting viewers, according to the company.

Darren Childs, UKTV CEO, said: “Our strategy of creating distinctive, ambitious and compelling new shows is continuing to pay off. I’m incredibly proud that for the first time, UKTV Originals were the top rating shows on six of UKTV’s channels and on UKTV Play last year. The breadth and depth of our channels offer a rich mix of opportunities for advertisers, and UKTV Play, which generated over 140 million views and attracted 1.8 million registered users in 2018, provides a data rich environment for targeted advertising.”

Richard Watsham, UKTV’s Director of Commissioning, said: “UKTV is increasing investment into originations yet again and in partnership with top talent, both in front of and behind the camera, it’s enabling us to strengthen our catalogue of popular and critically acclaimed shows. This year our aim is to grow original output even further with a series of network firsts. Flack, our first full blown drama series premieres on W in February. We’ll shortly be in production for a number of crime dramas for Alibi, and Steve Backshall will bring high octane specialist factual to Dave with the stunning Expedition. We want to build on our strong talent relationships too, Stacey Dooley Sleeps Over kicks off a revitalized slate for W which still has slots to fill and on Dave we’re looking for female fronted comedy entertainment shows to compliment other high performing hits, led by Taskmaster.”