Arts-on-demand service Marquee TV has struck an exclusive partnership with composer and filmmaker Michael Nyman to add the Michael Nyman Network as a content channel on its platform. 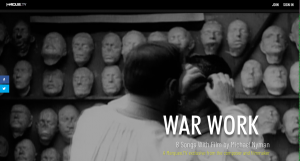 According to Marquee TV, the channel will bring unseen film and music compositions from Nyman to the public for the first time. The network kicked off on Saturday with War Work: 8 Songs with Film to mark the centenary of the end of the First World War.

Previously unseen works including The Girls in the Square, filmed in Mexico City and Private Light, Public Space, shot in Milan, will debut on the Michael Nyman Network in 2019

Nyman said: “I have a wealth of content to share with the world and I believe Marquee.TV is the perfect partner for me to bring it to audiences on a large scale.  My channel will bring challenging, engaging, diverse, surprising and thought-provoking pieces into the public domain for the first time ever. It seems fitting to end the WWI Centenary year by making War Work available to everyone and I’m looking forward to sharing more of my archive in the New Year.”

Simon Walker, Marquee.TV CEO and co-founder said: “We always hoped that Marquee.tv would become the platform of choice for artists and creators to connect directly with their audience. But we never imagined we would get there just six months after our launch and with such a revered composer and director as Michael.  We are thrilled to be able to give his work unmediated global reach for the first time. And we couldn’t be more proud of this statement of intent regarding Marquee.tv’s ambitions to connect cultural creators with culture-loving audiences all around the world.”

SVOD service Marquee TV launched officially in July in the US and UK in July, providing a mix of dance, music, opera and theatre performances and arts documentaries on-demand.