Facebook Watch now has more than 400 million people a month and 75 million people per day watching at least one minute of content on the video platform, according to vice-president of video, Fidji Simo. 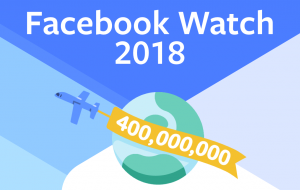 The Facebook exec announced the stats in a blog post that detailed the company’s video plans for the coming year, revealing that Facebook Watch’s 75m daily viewers spend more than 20 minutes on average on the service.

“These numbers are exciting to me because they show that people are not only coming to Watch regularly to find videos, but they’re also finding the things they want to watch and staying for longer,” said Simo.

Facebook rolled out Watch globally in August, one year after it debuted in the US, and has been widely rolling out its communal viewing experience, Watch Parties, since the summer. According to Facebook stats, there have been more than 12 million Watch Parties in Facebook groups and Watch Parties receive eight times more comments than regular videos in groups.

Facebook also introduced Premieres this year, so that creators can watch videos together with fans, and polling and gamification tools, and claims that in the coming months it will focus on brining more of these social experiences to Watch.

The social network said it is now working to “unify the video experience” across Facebook and has this week launched Watch on the desktop and Facebook Lite versions of the service.

“Right now, people can find videos on Facebook in a number of different places – Watch, News Feed, Search, Pages and more – and all of these can feel different,” said Simo.

“We want to make the experience of watching video feel immersive no matter where you discovered it. As part of this effort, we’ll be testing a few things in the coming months, like creating a darker background whenever you immerse yourself into a video on mobile.”

Facebook also aims to expand the ways that publishers and creators make money on the site, testing new ad breaks placements – like livestreams from gaming creators – and plans to bring its ‘brand collabs manager’ to more countries to  help brands and creators strike sponsorship deals.

“We’re also exploring new opportunities for advertisers. In September, we introduced In-Stream Reserve for premium online video and TV buyers to deliver their ads alongside the highest-quality Watch content, and next year we will continue to provide advertisers with more options to tailor their video ad campaigns and connect with their target audience,” said Simo.

On the content front, Facebook said it will continue funding originals in 2019 and announced it is renewing four shows for a second season – Huda Boss, Five Points, Sacred Lies and Sorry For Your Loss.

“Since launch, our aim with Facebook Watch has been to create a destination that people can visit to find the videos that matter to them, the video creators they want to see, and other fans that they can connect with. Everything we do is in service of this, and we’ll continue this mission in 2019.”