Ampere: Comcast-Sky and Disney-Fox to spend US$43bn on content in 2018

The mergers of Comcast-Sky and Disney-Fox mean that two in every 10 dollars spent on content worldwide will be by one of these two companies, according to Ampere Analysis. 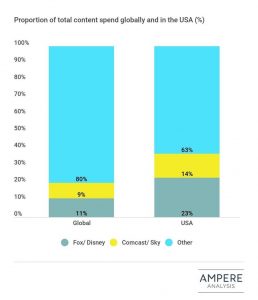 Disney-Fox is tipped to spend some US$22 billion on originated and acquired content in 2018, while Ampere estimates that Comcast-Sky will spend slightly less at US$21 billion. By comparison, Netflix is expected to spend more than US$8  billion on a profit and loss basis by the end of the year.

“Prior to the recent mergers, Netflix was on course to catch – and overtake – the top Hollywood studios by content spend. However, in light of the two new combined entities, Netflix would now need to triple spend to achieve this this feat,” said Ampere analyst, Daniel Gadher.

Ampere noted that the ‘mega-mergers’ of Comcast-Sky and Disney-Fox will strengthen each entity’s position in the global market while also protecting against “the rising strength of online video,” with Disney set to launch its own Netflix-rivalling SVOD service next year.

However, Ampere also sounded a note of caution over the implications of such consolidations on independent producers. “With a shrinking number of content acquirers in the market, the competition for rights will diminish,” said Gadher. “This will inevitably impact the indie sector’s ability to negotiate favourable deals.”