UK TV platform Freeview is due to launch a new mobile app on January 22, 2019 that it says will act as a “one-stop-shop” for the nation’s most-watched content. 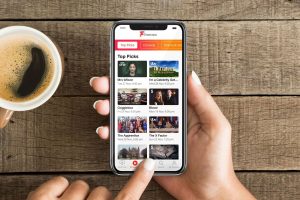 The free-to-use app will let viewers stream live channels from the BBC, ITV and Channel 4 and access on-demand content from BBC iPlayer, ITV Hub, All 4, My5, and UKTV Play.

Further catch up players and live channels have been promised “in due course”, with the app to launch on iOS initially followed by an Android rollout in early 2019.

Freeview announced the app at its Outside the Box event at BAFTA in London today, claiming it to be a “significant step” for the platform.

The app will allow viewers to watch live Freeview programming without using a TV aerial for the first time, marking a major evolution of the Freeview service in line with changing viewing habits.

“In an increasingly fragmented media landscape, the new Freeview mobile app is an excellent example of broadcaster and industry collaboration in action,” said Jonathan Thompson, CEO of Digital UK – the organisation that leads the development of Freeview.

“Today’s viewers value having access to their favourite shows when and where they want and the new app provides the aggregated experience that consumers increasingly expect from a TV provider.

“We’re putting the best of free-to-air content – public service and commercial – in to one place on mobile just as we have on TV, ensuring that great free tv is available to everyone wherever they are”.

The app is the result of a collaboration between Digital UK and Freeview’s common shareholders – the BBC, ITV, Channel 4 and infrastructure firm Arqiva. The latter led the software build and integrated the app with the content providers’ metadata feeds.

News of the app comes after Ofcom CEO Sharon White in March urged the UK’s public service broadcasters to work together in order to compete in an age of changing viewing habits and large digital rivals like Netflix and Amazon.

“Our PSBs may increasingly need to join forces to increase their bargaining power, just as they are doing with TV manufacturers. Increasingly, they will need to collaborate to compete,” White told delegates of Deloitte and Enders Analysis’ ‘Media and Telecoms 2018 & Beyond’ conference in London earlier this year.

The new Freeview app will replace the current Freeview TV Guide app, which lists what’s on the TV service for the next seven days.