The number of SVOD subscriptions in Europe will triple between 2015 and 2018 to reach 76 million this year, according to Digital TV Research. 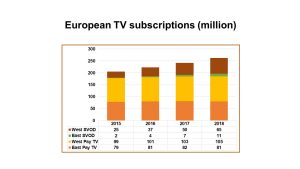 The latest stats indicate that SVOD’s share of European TV subscriptions will climb from 13% in 2015 to 29% in 2018, with traditional pay TV still making up the bulk of the market.

While pay TV is showing signs of growth, it is growing at a much smaller rate than SVOD. The research estimates that pay TV will only add eight million subscribers over the forecast period to total 186 million this year.

Combined, Europe is expected to have 262 million TV subscriptions – pay TV and SVOD – by the end of 2018, up from 205 million at end-2015, with Western Europe to experience the most growth.

“SVOD’s share of revenues will double over this period to 28% in 2018. Including AVOD, this translates to US$14 billion, up from US$6 billion in 2015,” said Simon Murray, principal analyst at Digital TV Research.

These figures are an estimate of gross subscriptions, with each household able to have more than one subscription – for example by subscribing to both a pay TV service and an SOVD service like Netflix.