Global revenues from pay TV and over-the-top services are set to climb this year, with OTT gains more than compensating for a decline in pay TV revenues, according to Digital TV Research. 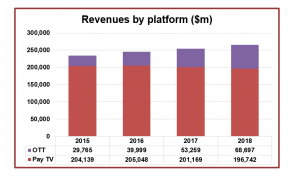 Despite pay TV revenues falling, the number pay of subscribers is expected to climb from 922 million in 2015 to 1.032 billion by the end of 2018. SVOD subscriptions are tipped to climb by 304 million over the same period to reach 474 million.