Jaunt winds down VR activities to focus on AR

Jaunt has announced that it will wind down a number of virtual reality (VR) products and content services in the coming weeks as it shifts its focus to augmented reality (AR). 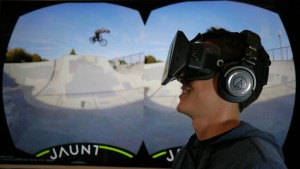 In a blog post, the immersive media company – which is backed by the likes of Sky, Disney and ProSiebenSat.1 – said that it “had to make some tough decisions” about its lines of business and that the change in focus will result in some redundancies.

Jaunt said it will work with its current clients to deliver existing commitments but will be focusing efforts on further developing technologies that allow for “the scaled creation of AR content”.

“We believe these changes will allow us to concentrate on driving innovation and value in products that will continue to be at the forefront of the immersive industry and drive the highest long-term company value,” said Jaunt.

The news comes after the company announced last month that CEO George Kliavkoff was stepping down and would be replaced by vice president of global business development and strategy, Mitzi Reaugh.

Earlier the same month it acquired a volumetric streaming software system from a company called Personify, which was founded by researchers from University of Illinois at Urbana-Champaign and has been working in the field of immersive video since 2010.

Jaunt acquired Personify’s ‘Teleporter’ line of business, including key staff, intellectual property, and four pending patents developed around the technology – which is designed to capture, processes and stream life-like AR assets in real-time.

The deal was designed to help the R&D efforts Jaunt recently announced for its Jaunt XR Platform – a business-to-business solution that enables partners to distribute augmented, virtual, and mixed reality assets through their own applications and channels.

Jaunt was founded in 2013 and big focus previously was to produce VR content through its Jaunt Studios arm and distribute VR content via its app for platforms like Daydream, Vive, Oculus, PlayStation VR and Windows Mixed Reality.