The number of global pay TV and SVOD subscriptions will increase by 37% between 2017 and 2023 to reach 1.877 billion, according to Digital TV Research. 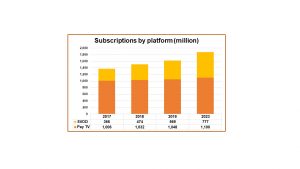 The new report estimates that worldwide subscription video-on-demand user numbers will more than double from 366 million in 2017 to 777 million in 2023 – an increase of 411 million.

At the same time, traditional pay TV is tipped to grow from 1.006 billion to 1.100 billion subscribers – an increase of 94 million.

While pay TV is expected to remain larger than SVOD on a global basis, video-on-demand will start to narrow the gap over the forecast period.

In the US multiple subscriptions will push the SVOD total from 132 million to 208 million as cord-cutting is expected to result in traditional pay TV subscriptions falling by 10 million to 80 million.

However, pay TV will remain the leader in China, a market described by Digital TV Research’s principal analyst, Simon Murray, as “the brightest star” globally with a combined 610 million SVOD and pay TV customers expected in 2023.

“China’s pay TV total will ‘only’ grow by 32 million to 375 million, but SVOD will rocket by 138 million to 235 million subscriptions,” said Murray. “India will add a further 49 million pay TV and SVOD subscriptions to take its total to 210 million in 2023.”