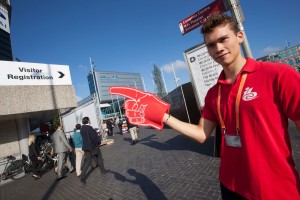 Speaking at IBC, Singular DTV’s co-founder and president of entertainment, Kim Jackson, discussed its development of a peer-to-peer exchange that will directly benefits artists and rights holders.

“Simply, what we are up to is creating a digital supply chain from creator to consumer,” said Jackson in a keynote talk titled ‘Blockchain: Empowering content creators.’

“We are aiming to empower creators to retain control of their IP. This is very important because in our industry right now, one of the major pain points for artists is their inability to track their IP all the way through to the distribution.”

Jackson said that SingularDTV is focused on “the transaction piece of the puzzle” in the form of rights, revenue and royalty across television, film, music and books.

The idea is that tokens associated with a particular piece of IP will be embedded into the work and royalties paid out on the basis of its popularity.

Jackson said that the system will be open to everyone that wants to participate – from individual artists to distributers, production companies and studios.

“The ability to track IP and revenue is where the power is,” she said, but also cautioned that we are still in the “very, very early days” of blockchain with applications still to emerge and widespread user interactions yet to occur.

“I think there’s room in the decentralised blockchain world for everybody and I think that our technology can be utilised by big distributers and studios for their accounting purposes,” said Jackson, denying that SingularDTV’s blockchain system would pose a direct threat to only streaming services like Netflix and Spotify.

“Just by utilising the backend piece of what we’re doing we’ll create so much more efficiency in the accounting and reporting, which will save a company like Netflix or Spotify or Amazon millions of dollars.”

SingularDTV describes itself as a blockchain entertainment studio that is empowering artists with applications to manage and create projects from development to distribution.