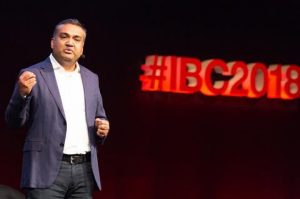 The television is the “fastest growing screen” for YouTube, while TV content is notching up hundreds of thousands of years of watch time on the service, according to YouTube chief product officer Google senior vice president Neal Mohan.

Delivering a keynote speech at IBC yesterday, Mohan said that while more than 70% of YouTube viewing happens on mobile phones, consumers are also watching over 180 million hours of YouTube content per day on television screens.

“Thanks to our partnerships with manufacturers, broadcasters and operators like Sky and Virgin Media, YouTube is available on over half a billion certified devices globally – from smart TVs to set-top boxes and to gaming consoles,” said Mohan.

“Here in the EU, the time consumers spend watching YouTube on their TV screens has grown 45% year-on-year.”

To help with this growth, Mohan said YouTube is investing in a ‘lean-back experience’ for the video service through better recommendations and machine learning – so that viewers “don’t need to sort through an ever-growing catalogue of videos to find something interesting to watch.”

“As the technology evolves, the potential is truly endless. Imagine turning on your TV in the morning for the local news and then coming back for more to get recommendations for a cooking show right before dinner.”

Mohan also stressed the success that traditional broadcasters are finding on the platform by posting clips from shows such as Love Island, The Jeremy Kyle Show, Britain’s Got Talent and RTL Late Night to reach a wider global audience.

“In 2017 alone, consumers watched the equivalent of 268,000 years of content from European Broadcasting Union (EBU) members,” said Mohan. “Broadcasters are some of the longest and most important partners for YouTube and we’ve been helping the best broadcast moments find new life online.”

Sport was also highlighted as one of the most popular verticals on YouTube, with sports leagues like Germany’s Bundesliga using the platform to reach fans and to increase brand awareness internationally. This German football channel alone now has more than one million subscribers and 400 million views.

Elsewhere, Mohan said that the rollout of YouTube Premium continues in Europe with the SVOD service now available in Belgium, the Netherlands, Luxembourg and Denmark, in addition to the UK, France and Germany. This puts it in a total of 21 countries around the world with more to come.

The YouTube Kids app meanwhile, is now available in 38 different countries across mobile and TV screens, with launches this week in Italy and Portugal. The service first went live three years ago.