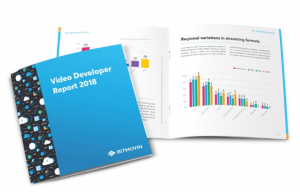 Latency is the biggest problem experienced by online video today, multiple codecs and streaming formats will continue to fight for market share and Apple retains a narrow lead as the most widely supported online video platform in a multi-device world.

These are some of the findings of the Bitmovin Video Developer Report from video compression specialist Bitmovin.

Based on a survey of 456 video developers working across broadcast, publishing, OTT streaming, online video and social media, Bitmovin’s report found that latency is the biggest problem  experienced with video technology today, according to over half of global respondents – 55% — rising to almost three quarters based in Latin America.  Delivery delays can be a particular pain point for online streaming compared to traditional broadcasters, especially for live sports events, says the report.

The next most prevalent issue is ensuring playback on all devices, pinpointed as a headache by half of global respondents, almost exactly the same percentage – 49% — as in last year’s Bitmovin survey.

However, only some 36% of respondents plan to deploy H.265/HEVC in the next 12 months. This represents a decrease from 40%  seen in the 2017 survey, which Bitmovin interprets as reflecting a trend toward using a wider array of next generation codecs in the future.

AV1 has gained significant momentum, with 29% of respondents planning on using the codec in the next year. This is over double the rate of planned usage – 14% — that was seen in the 2017 Bitmovin Video Developer Report.Only 15% are planning on using VP9, down on 18% in 2017.

Bitmovin also found fragmentation in streaming formats used, with HLS and MPEG-DASH used by 82% and 61% of respondents respectively.

Bitmovin found that HTML5 via browser is by far the most widely used format for video and audio delivery, with 87%  of those responding to the survey using it today. Currently, Apple iOS is the most widely supported native platform, supported by 62% vs 60%  for Android globally.

In terms of consumer devices, Bitmovin found that Chromecast is the current leader, supported by 42% of survey respondents compared to 36% for Apple TV, 34% for Android TV and 23% for Roku.

Android TV is likely to see most momentum in the next 12 months, with 17% of developers planning to move to add support, compared to 16% for Apple TV, 11% for Chromecast and 10%  for Roku.