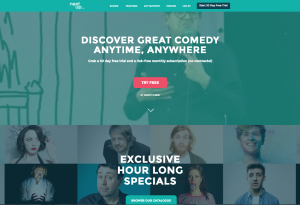 The subscription service launched the funding round five weeks ago and has already surpassed its £240,000 funding target for 10.3% equity in the business.

“We aim to reflect the incredible variety of comedy circuit, whilst supporting the acts, so the success of our Seedrs campaign is a really lovely endorsement from the stand-up community that we’re heading in the right direction,” said NextUp CEO Daniel Berg.

“Whilst we welcome investment from large corporations, the backing from comedy fans and ‘everyday investors’ has been instrumental and we’re incredibly humbled by everyone’s support.

Bruce Tuchman, former president of AMC Global and Sundance Channel Global, invested in NextUp’s last funding round earlier this year and came on-board as an investor.

NextUp costs viewers £3.50 a month and supports comedians with a Spotify-style revenue share model. The service is available on iOS, Android, Apple TV, Amazon Channels, Fire Stick and is due to launch soon on Roku devices.